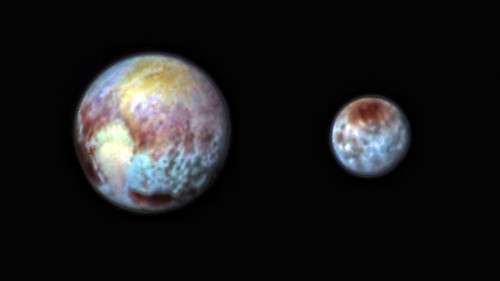 Pluto And Charon in false color.

And if we were on Pluto, directly under Charon looking straight up and saw Charon in the sky above us, we would see that one face of Charon that we always see. … Now here is where it gets a little strange. … What if we looked up again in an hour? A few minutes, two hours, a day, a year, fifteen years, where would Charon be? What would we see?

So Pluto, is like Charon being tidally locked to Pluto and only showing one face to Pluto, Pluto is also tidally locked to Charon and only faces one hemisphere to Charon. … That means that if Charon were straight above us from the planets surface, Charon would always be straight above us, forever. … As the Charon lunar month progressed through all the phases of the moon, we could lie on our backs and watch the moon go through all its phases in one place, never moving in the sky at all. One day we would look up and see a quarter moon, and another day we would see a full moon, and on the days approaching the new moon, we would see Charon slowly change to one crescent and then fade out, and then, in a few days, Charon would slowly fade back in with the opposite crescent. All the while as it was directly overhead, never moving.

The sun would move. The stars would move. Charon, the moon, would stare down at us like an ever watchful god.

That also means that if we were born on one side of the planet, we may never even know there was a moon at all. We would never see it. Imagine a Plutonian Magellan circumnavigating Pluto only to discover, not a new continent, but a moon. This imaginary Magellan would be navigating by stars, until he saw this giant orb in the sky. Holy crap, I would surely shit my pants if I were there.